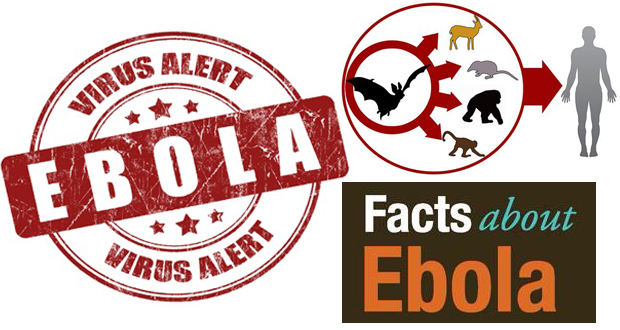 Ebola outbreak in the present year 2014 is considered to be the largest outbreak of Ebola as per the World Health Organization (WHO) which has declared it an international emergency. Ebola virus has already gripped West African nations and until now, Ebola outbreak has recorded a fatality rate of about 80% which is quite a high number. Keeping in view the ever-shrinking globe, Ebola virus can shock anybody in any country with its presence. The only key to save oneself and dear ones from Ebola virus infection are creating awareness and taking steps to prevent it. Here is all about Ebola virus- what are the causes of Ebola infection, its symptoms, diagnosis, treatment and prevention- the facts about Ebola virus to help you keep a distance from this very dangerous infection.

What is Ebola Virus Disease?

Ebola virus disease which was previously known as Ebola hemorrhagic fever is a fatal illness having a death rate of up to 90% and is caused by Ebola virus. Ebola can be defined as a group of viruses causing hemorrhagic fever as it leads to bleeding inside as well as outside infected body. To be precise, Ebola virus causes an infectious and fatal disease which shows itself as fever and severe internal bleeding. This disease spreads through contact with infected body fluids of Ebola virus. Having quite a long incubation period (8 to 21 days), Ebola viral infection can gradually lead to organ failure and, in many cases, death. There is still no cure for Ebola virus infection.

Ebola is one of the most deadly viruses having a fatality rate between 50 to 90%. Ebola virus is native to Africa where occasional outbreaks have occurred for decades. This virus lives in animal hosts and has been found in African monkeys, chimps and other nonhuman primates. Human beings can come in contact with this virus through infected animals. Once Ebola virus contracts a human being, it can then spread from one person to another and so on, primarily through contact with body fluids or contaminated needles. Till now, no medicine has been identified that can treat Ebola virus. If someone is diagnosed with Ebola, supportive care and treatment for complications are given by the doctors.

It is now clear that Ebola disease is caused by the virus from the Filoviridae family, commonly known as Ebola virus. It is actually transmitted from animals to humans and then it spreads from person to person by direct contact with the bodily fluids of such an infected person or animal. According to scientists, there are five different types of the virus that can infect humans. World Health Organization (WHO) says that Ebola disease can be caused by close contact with the blood, secretions, organs or other bodily fluids of infected animals. In humans, Ebola disease can be caused by the following methods.

While it may be clear now that the Ebola virus is first transmitted from animals to humans and then from an infected human being to other humans. However, if you want to know how this transmission actually takes place, here are the facts about the transmission of Ebola virus from animals and from humans.

Transmission of Ebola Virus from Animals to Humans

Some of the examples of how the Ebola virus gets transmitted to humans from an infected animal include the following.

Transmission of Ebola Virus from Human to Human

It should be made clear here that until a person develops the symptoms of Ebola infection, he or she does not become contagious and can not cause Ebola disease in others. It is only when a person starts showing symptoms that he becomes a carrier of Ebola virus.

Symptoms alone cannot be used to diagnose Ebola virus disease as these may resemble the symptoms of other diseases such as cholera or malaria. Generally, some tests of blood and tissues are done to diagnose Ebola. These test may include the following.

There may be some other tests too that a doctor may deem fit to diagnose whether a person suffers from Ebola infection. If a person is diagnosed with Ebola, he is immediately isolated from the public so that the disease can be prevented from spreading.

Till now, no antiviral medicine or drug has been proved to be effective against Ebola virus infection. Patients who need treatment are given supportive care and medicines for relief from symptoms. Severely ill patients are given intensive supportive care along with intravenous fluids or oral rehydration with solutions containing electrolytes. Some patients do recover with appropriate medical care. Supportive hospital care includes the following.

In some advanced countries like the USA, an experimental serum that destroys infected cells is also given to the patients. Generally, the aim of Ebola treatment is to treat the symptoms and to prevent secondary infections as well as complications such as pneumonia and liver failure.

According to the World Health Organization’s reports, as many as 80% of the people infected with Ebola virus die. However, the high rate of death is generally because of a drop in their blood pressure and failure of organs rather than from blood loss.

When to Seek Medical Care for Ebola Disease?

The only way to survive from Ebola disease is to seek prompt medical care as soon as one comes in contact with the virus or at least when symptoms are seen. Seek medical help in the following situations.

At present, there is no medicine or vaccine for Ebola virus disease through many researches are on to develop vaccines as well as medicines for Ebola virus disease. Current policy for the prevention of Ebola disease focuses on avoiding contact with the virus. The precautions that can help prevent Ebola infection are listed below.

Here are some facts regarding Ebola virus and the disease caused by it to satisfy the curiosity of those who have it.